‘Stop the massacre’: Colombia tax protests continue after more than a dozen people DIE in clashes with police

Azlyrics May 4, 2021 Leave a Comment on ‘Stop the massacre’: Colombia tax protests continue after more than a dozen people DIE in clashes with police 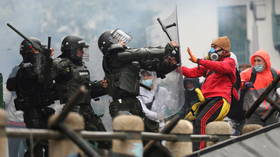 Demonstrators clash with members of security forces during a protest against the tax reform of President Ivan Duque’s government in Bogota, Colombia, April 28, 2021. ©  Reuters / Luisa GonzalezFollow RT on

Heated demonstrations over a proposed tax reform in Colombia have continued even after the government pulled the controversial bill, reignited by the death of a young activist reportedly shot in the head by police.

Rallying around the slogan “Stop the massacre,” protesters took to the streets in several cities on Monday, following the news that Nicolas Guerrero, 22, was reportedly shot in the head by riot police in the city of Cali. The new round of protests stretched from Cali in the southwest to the capital of Bogota, as well as Medellin and Barranquilla in the north, AFP reported.

Before it was withdrawn on Sunday by President Ivan Duque, the tax reform proposal triggered days of intense protests and a nationwide strike beginning last Wednesday. Clashes between activists and security forces left at least 18 protesters and one police officer dead, according to Colombia’s human rights ombudsman. More than 800 people were also wounded in the chaos.

Footage has circulated online showing clashes and police violence against protesters over the last week, including one harrowing clip purporting to capture the moment a man was fatally shot by officers during a scuffle.

Footage from the ongoing mass anti-government/police brutality protests in Colombia led by students and young people. This looks like police tear-gassed a public bus… full of people inside https://t.co/TsxmsMUH0r

The protests continue in #Colombia This video was taken today in #Manizales and it is one of many examples of the police violence and human rights violations in Colombia #ParoNacional3M#SOSColombiaDDHH#ParenLaMasacre@amnesty@hrw@CorteIDHpic.twitter.com/sJWrJYDhVI

Duque’s government has even deployed the military to some areas to get a handle on the unrest – including in Cali, where protests have allegedly descended into riots and looting. Some activists have alleged the security forces are using live ammunition.

This is in the Colombian border town where the US government and billionaire Richard Branson held a faux-humanitarian concert in a failed attempt at regime change in Venezuela. Funny how the crocodile tears dry up as the Duque narco-regime deploys tanks against its own people. https://t.co/ZPxDtzHXn3

Finance Minister Alberto Carrasquilla resigned his post on Monday, saying he wanted to give the government leeway to proceed after the tax proposal – which he had a hand in crafting – was withdrawn due to the protests. The plan sought to boost government revenue by closing a number of loopholes and raising new taxes on citizens and business owners, as well as sales taxes on utilities and some food items. Carrasquilla will be replaced by the current Commerce Minister Jose Abondano.

The bill’s withdrawal has taken some wind out of the protesters’ sails, with two large unions backing out of a general strike planned for this week. However, some organizers are still moving ahead, with another group vowing to stage a mass protest and strike on Wednesday, over proposed healthcare reforms.

Amid public outrage over the police violence, the Colombian government has sought to blame “criminal organizations” for the unrest. During a Monday news conference, Defense Minister Diego Molano claimed to have intelligence proving ties between armed groups and the protests, citing leftist rebel factions FARC – officially disbanded in 2017 after a peace deal – and the National Liberation Army (ELN) by name, but declined to share any evidence with reporters.

Though often quick to condemn ‘anti-democratic’ practices by foreign states, the Biden administration has so far offered no comment on the unrest in Colombia, whose government has long been a close ally of Washington.

Police brutality has been the focal point for previous protests in Colombia, with a wave of demonstrations kicked off last year after the death of lawyer Javier Ordonez, who was repeatedly beaten and tasered by officers for allegedly violating local coronavirus restrictions.