Azlyrics May 4, 2021 Leave a Comment on Chairman of South Korean dairy giant steps down after company claims its yogurt is effective against Covid-19 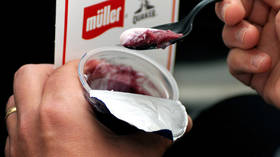 The head of one of South Korea’s largest dairy companies has resigned after the firm claimed that its yogurt drink helps to fight Covid-19, prompting authorities to launch a probe into false advertising.

Hong Won-sik, chairman of Namyang Dairy Products, announced on Tuesday that he would no longer lead the company, adding that he took full responsibility for the dubious claim and the resulting scandal.

Namyang’s research chief claimed last month that the company’s Bulgaris yogurt reduces the likelihood of coronavirus infection by as much as 78%. Although the announcement cautioned that the results were from preliminary research, the assertion caused sales of the product to skyrocket, with the company’s stock price surging nearly 30%. However, the claim soon became the subject of intense scrutiny, with experts noting that there wasn’t enough data to demonstrate the yogurt’s antiviral qualities.

The company had carried out their research on monkey lung cells, incubating the virus on test dishes and applying the yogurt directly to the virus.

The questionable claim eventually prompted the South Korean government to take action. The Ministry of Food and Drug Safety accused Namyang of using misleading information to market its product, in violation of a law prohibiting false advertising. Police raided Namyang’s Seoul headquarters, as well as its plants, as part of an ongoing investigation to determine whether the company overstated the alleged Covid-stopping properties of its dairy product.

The ministry also wants to temporarily suspend operations at Namyang main dairy plant in Sejong, but is awaiting the approval of the provincial government.

“We will continue to actively curb illegal advertisements that disturb trade order and mislead consumers,” the ministry said in a statement last month. The offense is punishable by up to 10 years in prison or a fine of 100 million won ($90,000).

Hong’s decision to step down comes a day after Namyang CEO Lee Kwang-bum offered his resignation, also due to the yogurt scandal.

The yogurt joins a growing list of highly controversial Covid-19 ‘treatments’, including everything from bleach to “healing water.”