Azlyrics April 7, 2021 Leave a Comment on US announces $235mn aid package for Palestinians, backs 2-state solution to conflict with Israel 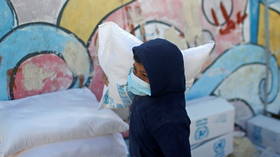 FILE PHOTO: A Palestinian boy carries a bag of flour at an aid distribution center run by the UNRWA at Beach refugee camp in Gaza City on January 14, 2021 © REUTERS/Mohammed Salem Follow RT on

The US backs a two-state solution to the Israel-Palestine conflict and will restore some $235 million in aid to the Palestinians which was cut by former President Donald Trump, Secretary of State Antony Blinken has announced.

In a statement on Wednesday, Blinken said that the US’ economic, development, and humanitarian assistance to Palestine provides “critical relief” to those in need, as well as fostering security and stability in the troubled region.

The resumption of aid is part of Washington’s wider aim to “advance towards a negotiated two-state solution” to the conflict between Israel and Palestine, he added.

Washington will also provide security assistance that is “consistent with US law,” Blinken said, although he did not specify what that would entail.

The aid package includes $75 million in economic and development assistance in the West Bank and Gaza, $10 million for peacebuilding programs, and $150 million in humanitarian assistance for the UN Relief and Works Agency for Palestine Refugees (UNRWA).

Many of the refugees helped by the UNRWA are relatives of the 700,000 Palestinians who fled the country in the 1948 exodus as the state of Israel was created. The treatment of the refugees, many of whom live in the West Bank, Gaza Strip, Jordan, Lebanon, and Syria, is a major sticking point in the conflict between Israel and Palestine.

In 2017, the US gave $364m to the UNRWA, before the Trump administration cut all funding to the agency the following year. At that time, a state department spokesperson branded the UN agency “irredeemably flawed” and said supporting the increasing number of Palestinian refugees is “simply unsustainable.”

Also on rt.com
Whoever wins in the Israeli election, it’s clear that the Palestinians will be the losers

Responding to the US move on Wednesday, Israeli Foreign Ministry spokesman Lior Haiat said the UNRWA “in its present form perpetuates the conflict, rather than helping to resolve it”.

“Therefore, the renewal of [US] assistance to UNRWA must be accompanied by substantial and vital changes to its nature, goals and organizational conduct,” Haiat added.

In January, after Joe Biden took office as US president, the acting envoy to the UN Richard Mills told the Security Council that the new administration backed a two-state solution and would restore Palestinian aid.

US-Palestinian relations deteriorated during Trump’s term after the administration recognized Jewish settlements in the occupied West Bank and Jordan Valley, and acknowledged Jerusalem as Israel’s capital.