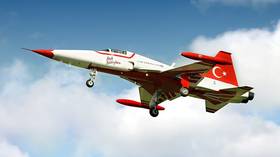 A training flight for the Turkish Stars aerobatic team ended in tragedy on Wednesday, after one of its supersonic NF-5 jets crashed in Turkey’s central Konya Province, killing the pilot.

The crash took place at around 2:15pm local time in Konya’s Karatay district, not far from the Third Main Jet Base, which is the home of the Turkish Stars and the main military aviation hub in the province.

LATEST— A training aerobatic aircraft has crashed in Karatay district of Turkey's central Konya province, Defense Ministry says; rescue teams have been dispatched to the areahttps://t.co/1u20MuMfWIpic.twitter.com/6Anq94l4Pg

The incident was confirmed by the Defense Ministry and Turkey’s President Recep Tayyip Erdogan, who expressed his condolences to the family of the deceased aviator in a post on Telegram.

The reasons for the accident, which occurred during a routine training flight, are currently being investigated.

The Turkish Stars team was first formed by the Turkish Air Force back in 1992, and has since taken part in numerous airshows and aerial demonstrations. In 2001, its display in the air above Azerbaijan’s capital, Baku, was witnessed by a crowd of more than one million people.

The team flies the US-designed NF-5 jets, which were purchased from the Dutch military and underwent a number of modifications. Together with Russia’s Strizhy (or Swifts) and the Russian Knights, it is one of the few aerobatic teams in the world to use supersonic planes in its performances.

‘We’re just a pile of misery’: Victims of Germany’s child molesting ‘experiment’ tell RT of their nightmare that lives on